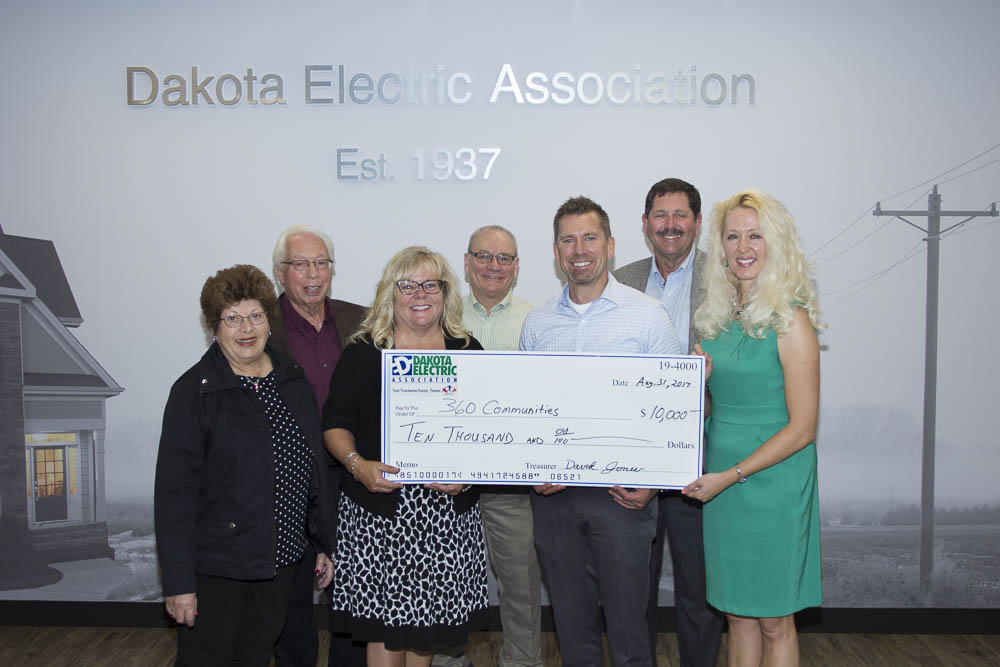 Dakota Electric Association, along with CoBank, one of its lenders, recently donated $10,000 to 360 Communities. Dakota Electric’s $5,000 donation was matched by CoBank through the company’s “Sharing Success” grant program.

Dakota Electric’s Board of Directors, along with Rachel Hanson of CoBank, presented the check to Jeff Mortensen, CEO of 360 Communities, and Laurie Bolin, development director, during a recent board meeting.

Mortensen thanked Dakota Electric’s board for the donation and Dakota Electric’s support over the years. “Thank you so much for your support, we could not do our work without support from the community,” Mortensen said. “We just couldn’t do it without you.”

360 Communities provides assistance to more than 18,000 individuals each year with a variety of programs throughout the area, including domestic violence shelters, resource centers, food shelves and more. This is the fifth year that Dakota Electric’s donation was doubled through CoBank’s grant program.

“What a good choice, Dakota Electric has made in supporting 360 Communities,” Hason said. “We are appreciative of Dakota Electric’s continued involvement in our Sharing Success program.”

“We are happy to have the opportunity to once again double our donation through CoBank’s grant and help a worthwhile community organization like 360 Communities,” said Dakota Electric’s Board Chair Jim Sheldon.